YEREVAN (WORLD CAPITAL OF THE BOOK 2012) 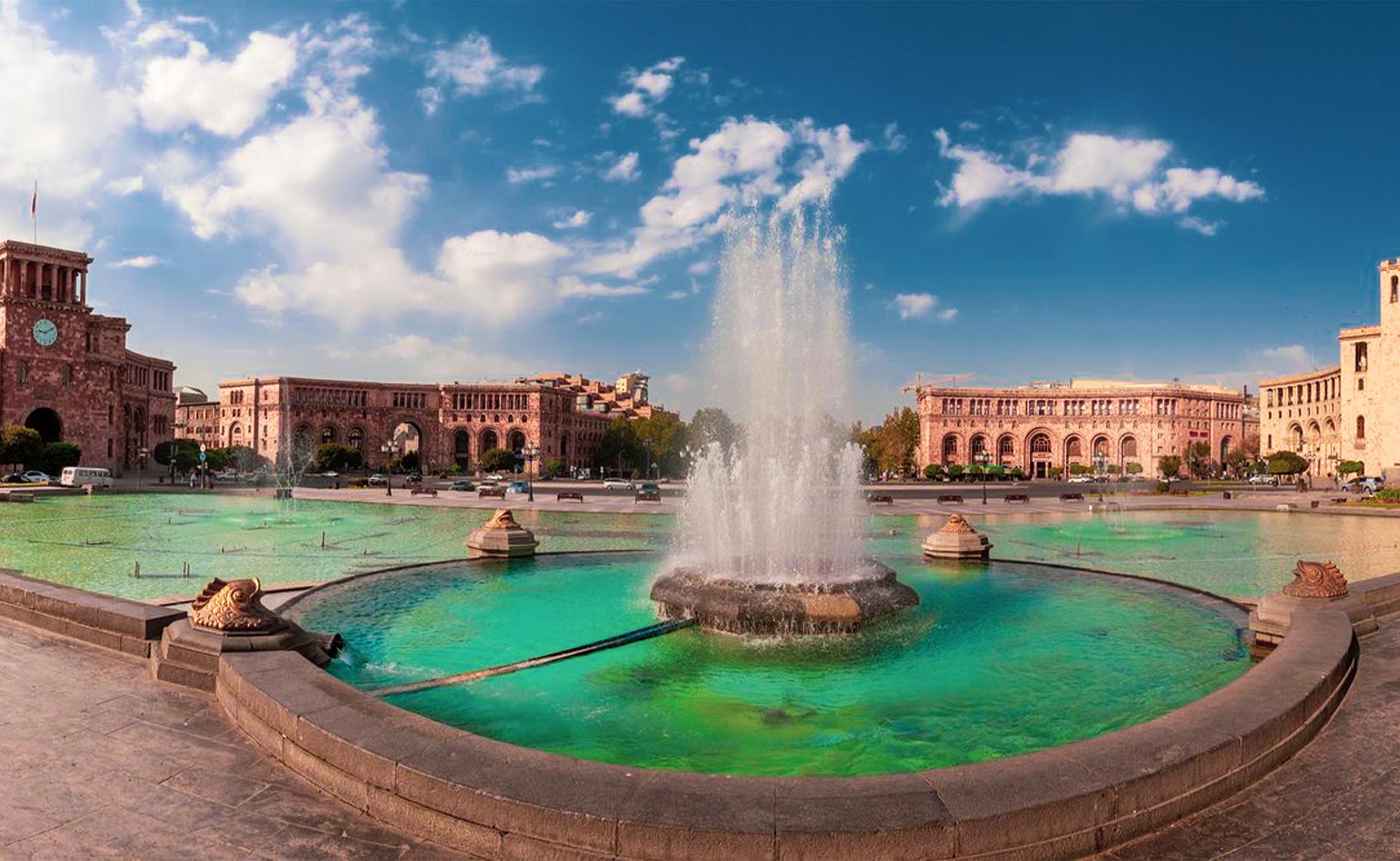 On April 22, 2012 Yerevan was designated the 12th World Book Capital for an period of 12 monthes. In 2012 the Armenians celebrated the 500th anniversary of the Armenian press. Armenians are one of the first Eastern peoples to print books in their own language and to set up the first printing press in the Middle East (Isfahan, Iran) in 1638. And the first printing house in Armenia was opened only in 1771 (Etchmiadzin, Armenia). Yerevan is a of the oldest cities in the world and one of the few cities that have a birth certificate. Yerevan’s birth certificate is a wedge-shaped inscription on a stone slab which states that the Urartian king Arghishti I in 782 BC. founded the fortress of Erebuni.

The History Museum of Yerevan

The History Museum of Armenia 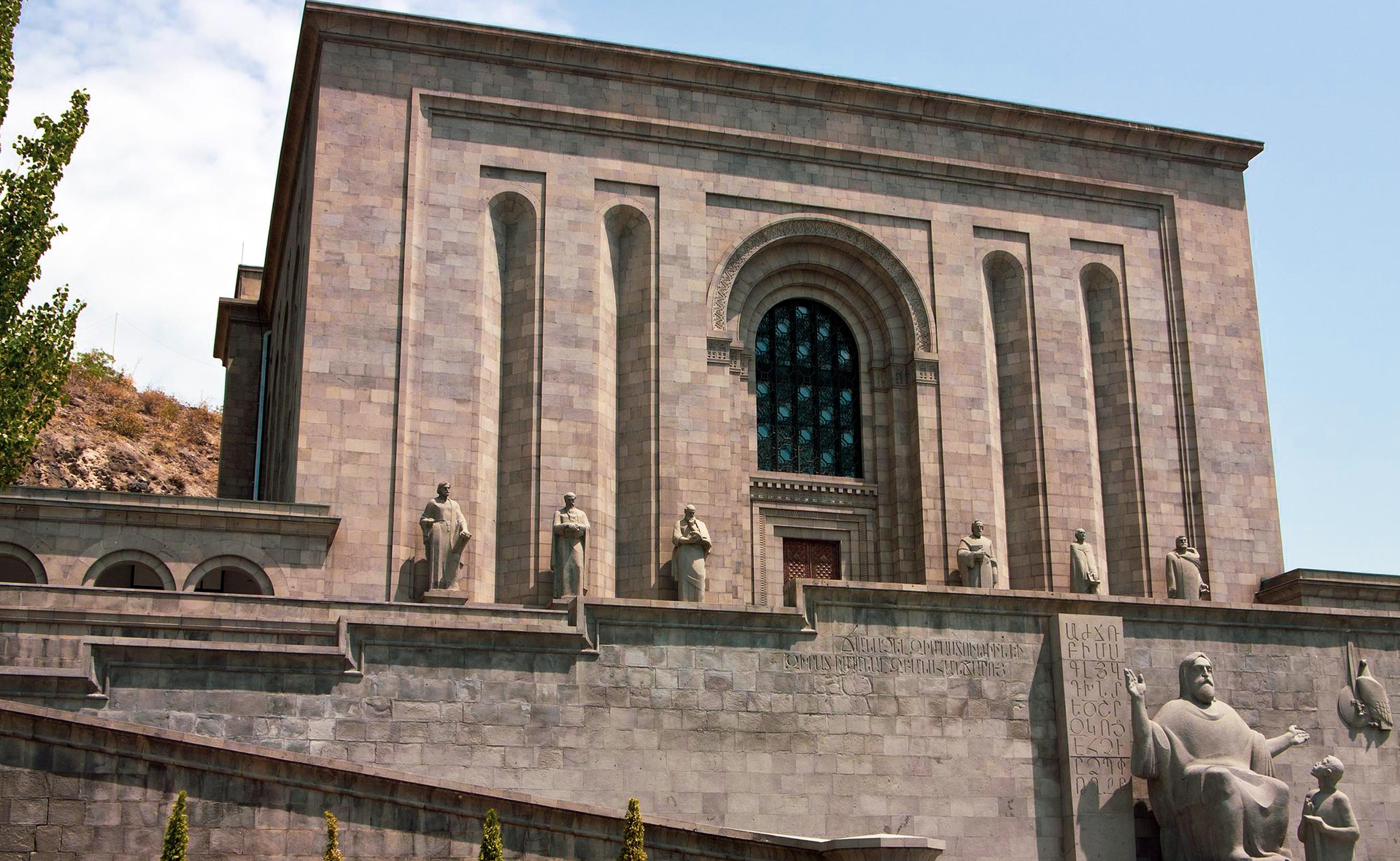 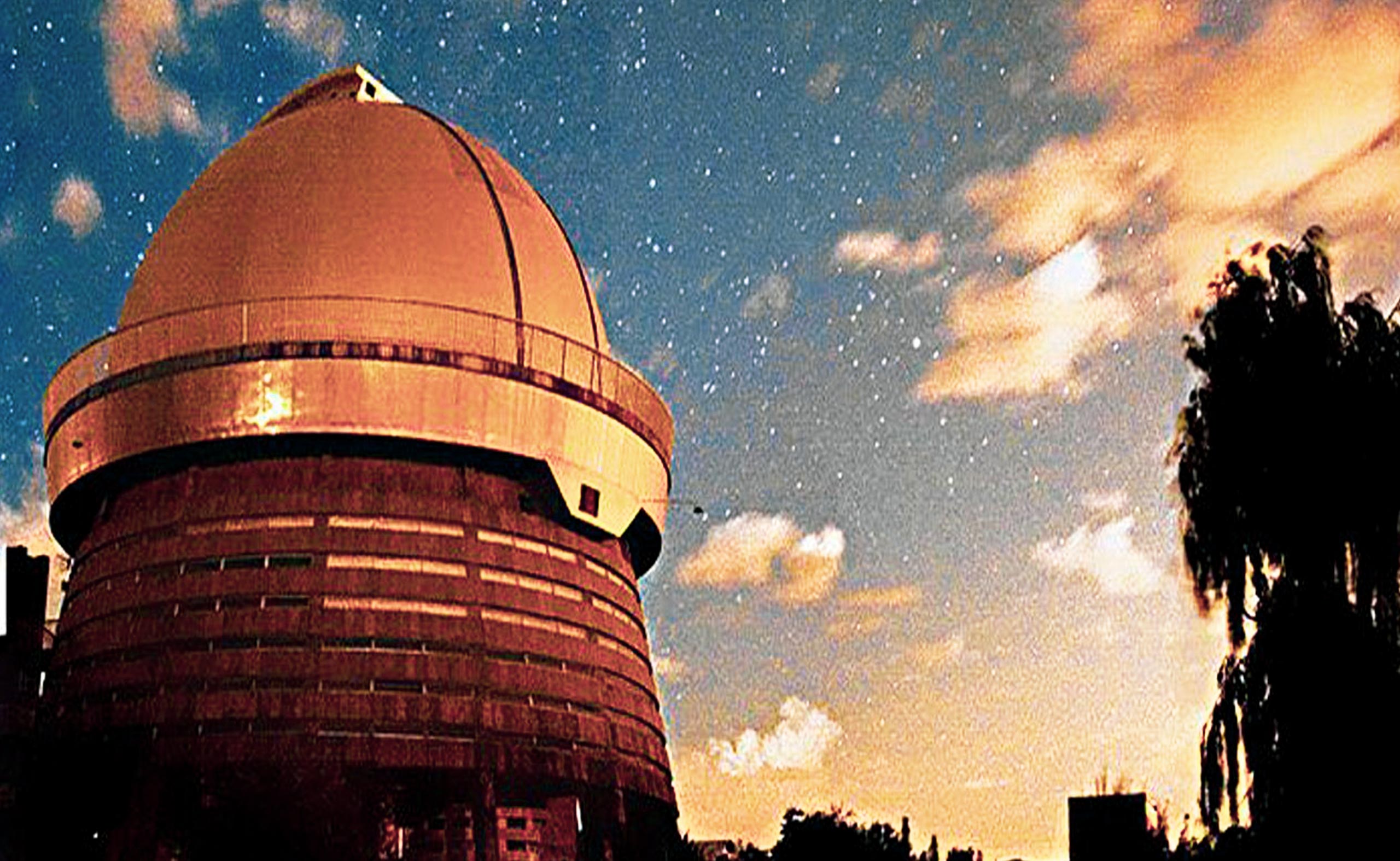 The first Byurakan survey (FBS) recorded by the Armenian astrophysicist Benyamin Markaryan was presented to be registered on the World Memory Register in 2011. It is the largest astronomical survey carried out by the Byurakan Astrophysical Observatory between 1965 and 1980 and is considered the most important spectral investigation of the 20th century. Markaryan’s investigation is unique in his systematic search for active galaxies thanks to which the Armenian astrophysicist discovered 1,500 galaxies with excessive ultraviolet radiation. They are known by the name of Markaryan galaxies. 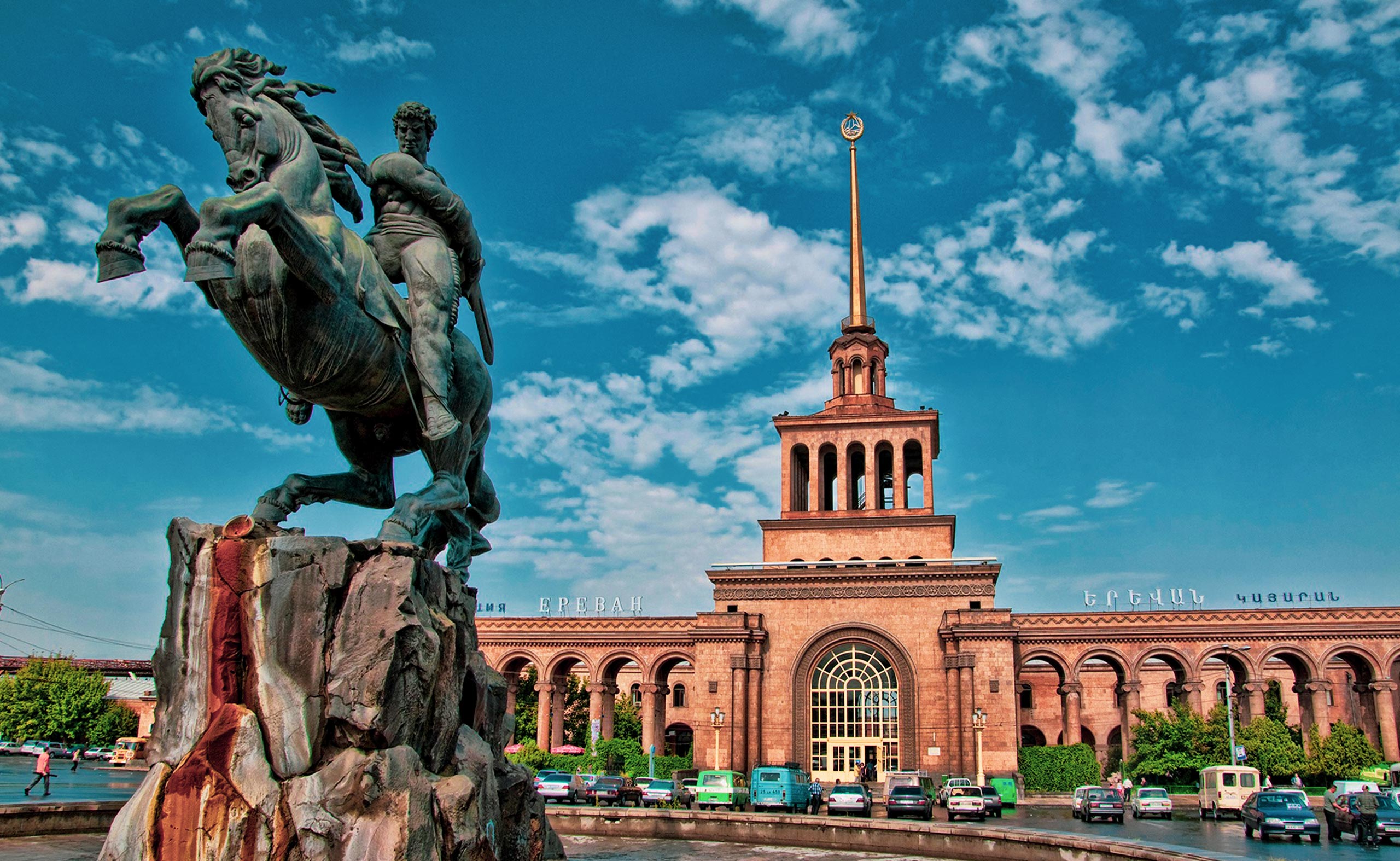 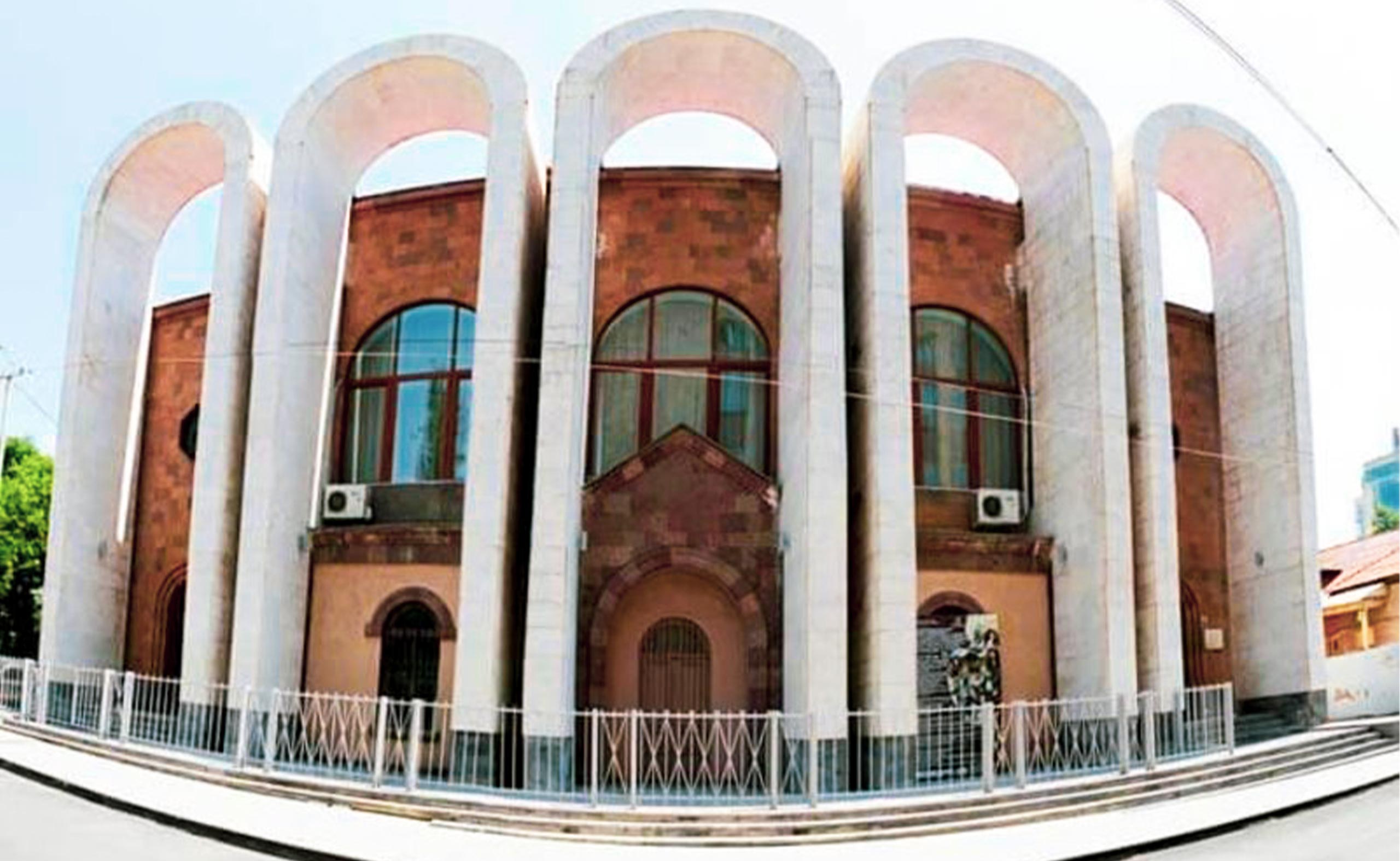 Since 2013, the collection of manuscripts of note and film music by the composer Aram Khachatryan has been inscribed on the UNESCO Documentary Heritage List (Memory of the World). Aram Khachatryan became known internationally especially with the Sword Dance from the fourth act of the “Gayane” ballet, one of the most popular pieces of the whole classical repertoire. The Dance of the Swords has also been used several times in the cinema: among these the films “One, Two, Three” by Billy Wilder, “Scoop” by Woody Allen and “Mr. Hula Hoop ”by Joel Cohen. Very well known are his ballet “Spartacus”, also used as a soundtrack in the famous British television series Capitan Onedin (“The Onedin Line”) and the stage music “Masquerade”.

The House-Museum of Aram Khachatryan 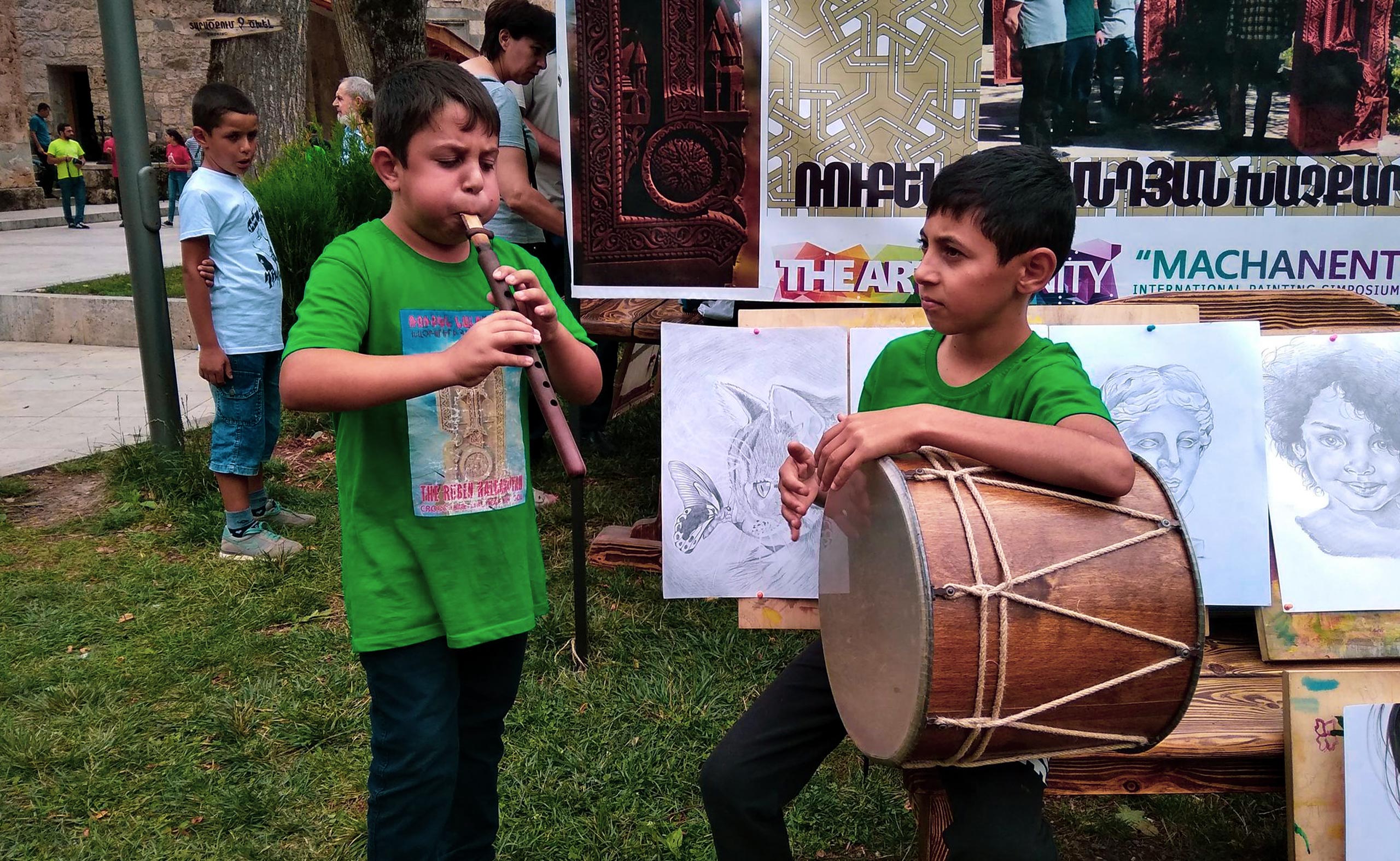 In 2008 duduk and his music were included by UNESCO in the List of Oral and Intangible Heritage of Humanity. The most characteristic Armenian musical instrument is the duduk, which has a warm, soft, slightly nasal tone, and a melancholy and cheerful sound at the same time, as well as the typical nature of the Armenian people. Duduk is one of the oldest double reed wind instruments in the world. World-renowned Armenian duduk players are Levon Madoyan, Vache Hovsepyan, Ghevorg Dabaghyan, Levon Minasyan and Jivan Gasparyan. The duduk was also used in the soundtracks of the films “The last temptation of Christ” and “The Gladiator”. 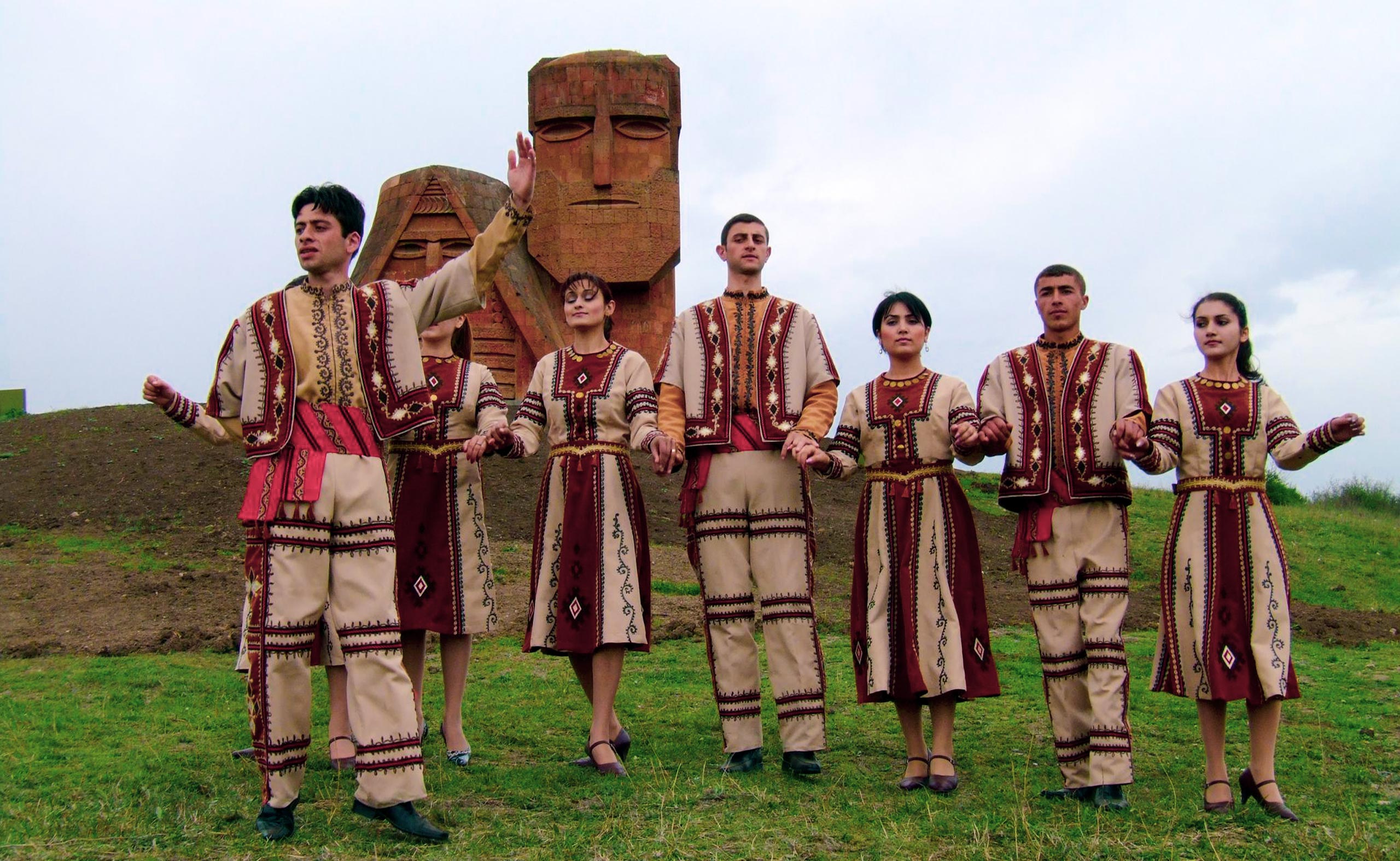 In 2017 the Armenian folk dance “Kochari” was inscribed on the Representative List of the Intangible Cultural Heritage of Humanity. “Kochari”, which is an essential part of the Armenian popular tradition, has been widely performed throughout Armenia during holidays, various family ceremonies and other public events and has remained unchanged for centuries. “Kochari” was performed by Armenian soldiers in front of the Reichstag in 1975 following the victory in World War II, after which it was called “Dance of Victory”. 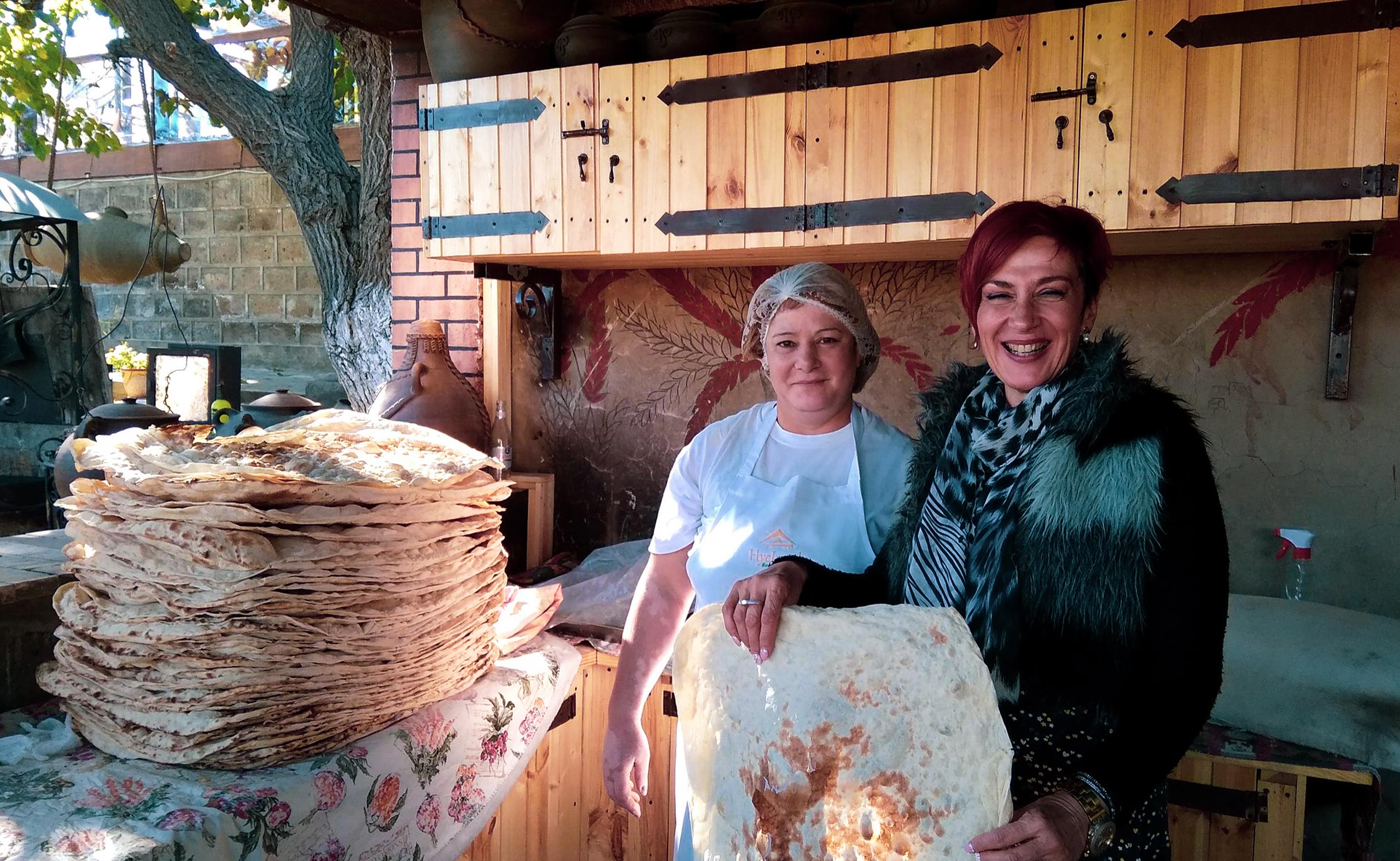 On November 26, 2014 lavash was included by UNESCO in the Representative List of the Intangible Cultural Heritage of Humanity. Lavash, a traditional thin focaccia, is an integral part of Armenian cuisine. Il is mostly baked in “tonir” (a stove dug in the ground). Traditional lavash bread with its preparation is a reflection of Armenian culture. The preparation of lavash is a sociable activity, which strengthens social ties in the family and in the community. In weddings, the lavash is spread on the shoulders of the two spouses as a symbol of prosperity and fertility.

CHURCHES OF ECHMIADZIN AND THE ARCHAEOLOGICAL SITE OF ZVARTNOTS

Etchmiadzin is an Armenian city about 20 km from Yerevan. Echmiadzin is the center of the Armenian Apostolic Church, and is the Holy See of the Catholicos (spiritual leader) of all Armenians. Etchmiadzin houses the mother mhurch (the main Cathedral) and 3 other churches, which have been recognized by UNESCO as a World Heritage site since 2000. These churches are considered important examples of early Christian architecture in Armenia.

The Cathedral of Echmiadzin 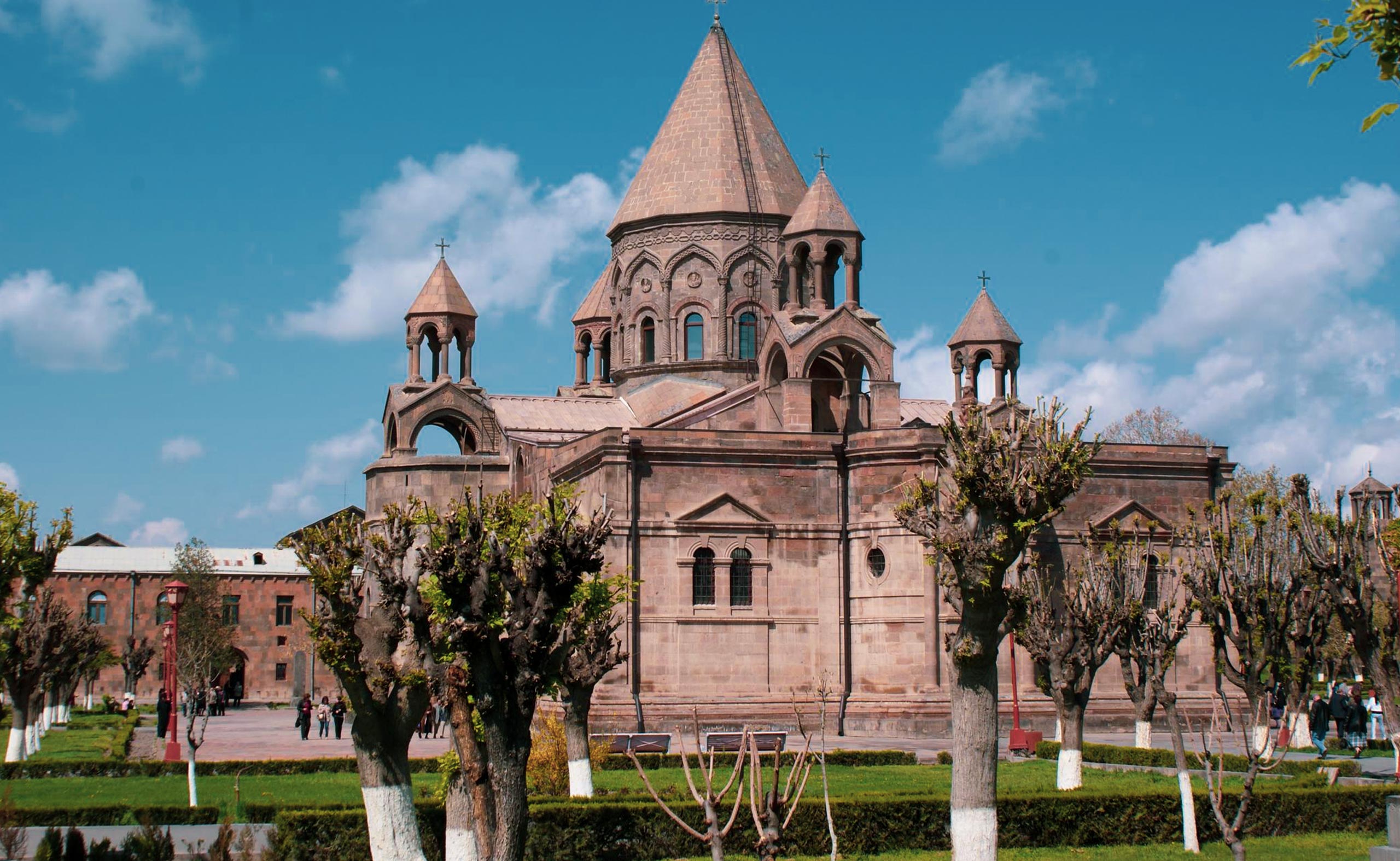 Echmiadzin is the spiritual centre of the Armenian Apostolic Church. The Cathedral of Echmiadzin was originally erected by St. Gregory the Illuminator in the form of a vaulted basilica in 301-303 AD, when Armenia was still the only country in the world to have adopted Christianity as a state religion. Saint Gregory had a vision of Christ descending from heaven and striking the earth with a golden hammer to indicate where the cathedral should have stood; for this reason he called it Echmiadzin, i.e.  “Descent of the Only Begotten”. Echmiadzin was the seat of the Catholichos (Supreme Patriarch) of all the Armenians from the beginning of the Christian era (beginning of the 4th century) to 461 AD and then again from 1441 to the present day.

The church of St Hripsime 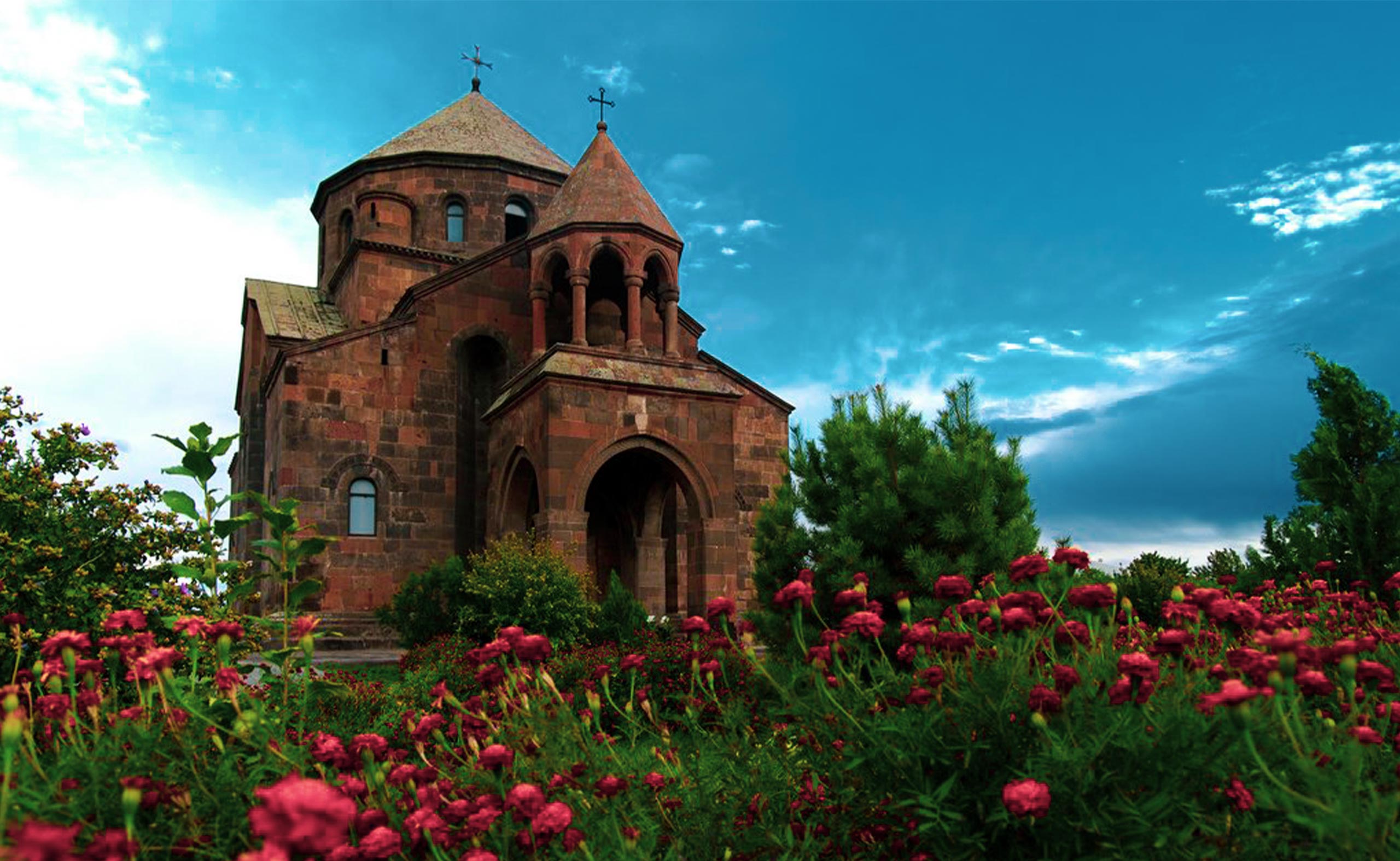 The church of Saint Hripsime, founded in 618 AD, was built on the chapel of Saint Hripsime, whose burial room has remained intact up to now. Saint Hripsime is considered as one of the oldest churches in Armenia and is known for its refined architecture in the classical Armenian style, which has influenced many other Armenian churches. From an aesthetic point of view, it is one of the most beautiful churches in Armenia in terms of proportions, style and architecture. 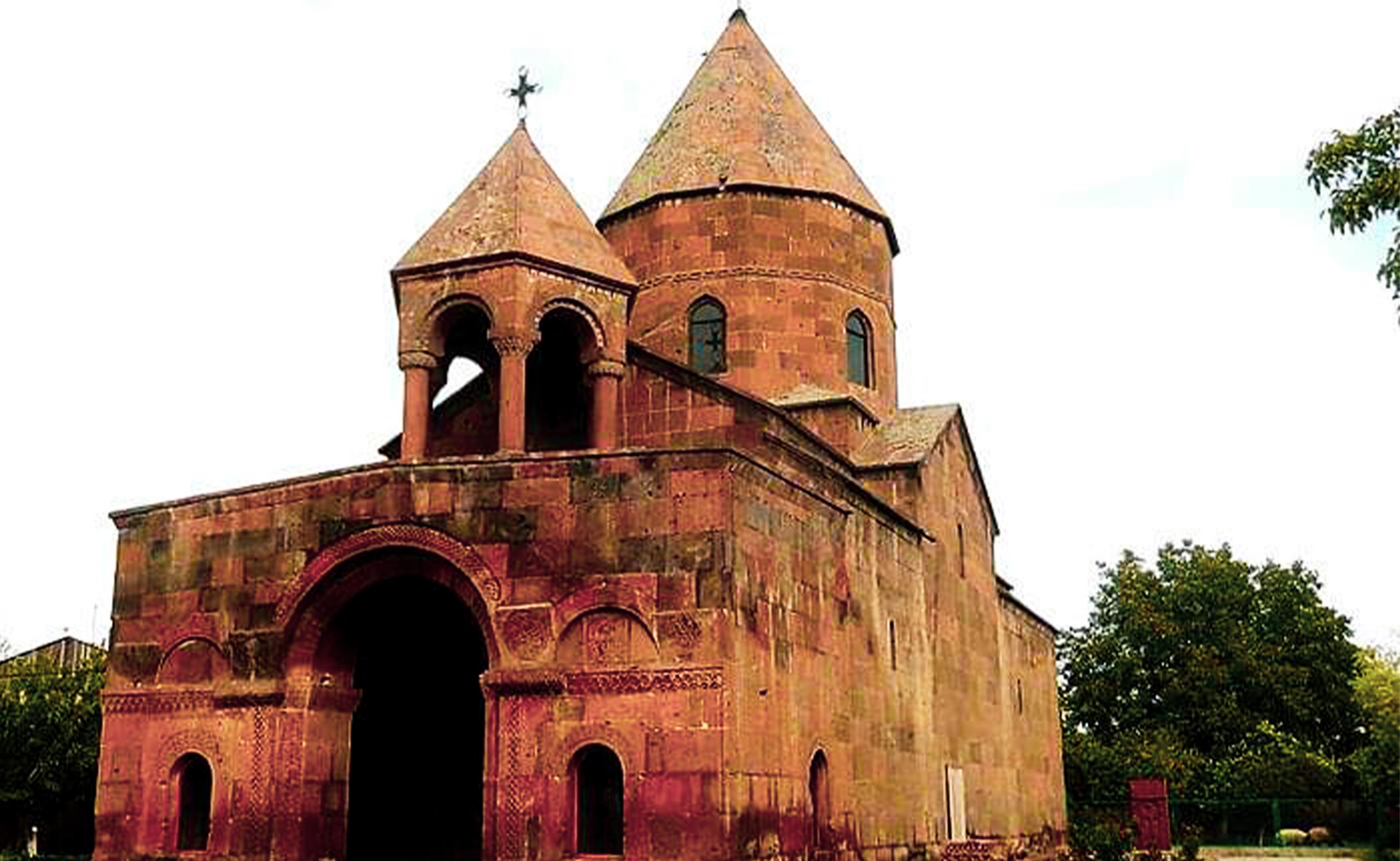 Shoghakat, “Beam of light”, so named after the vision that had St. Gregory and which inspired the construction of the Great Cathedral, is the most recent church of the Holy See of Echmiadzin. It was built in 1691. Since it is not known which chapel of the Ripsimian nuns is located under Shoghakat, it can be considered as a tribute to all the unknown martyrs of the first turbulent years of Christianity in Armenia.

The church of St Gayane 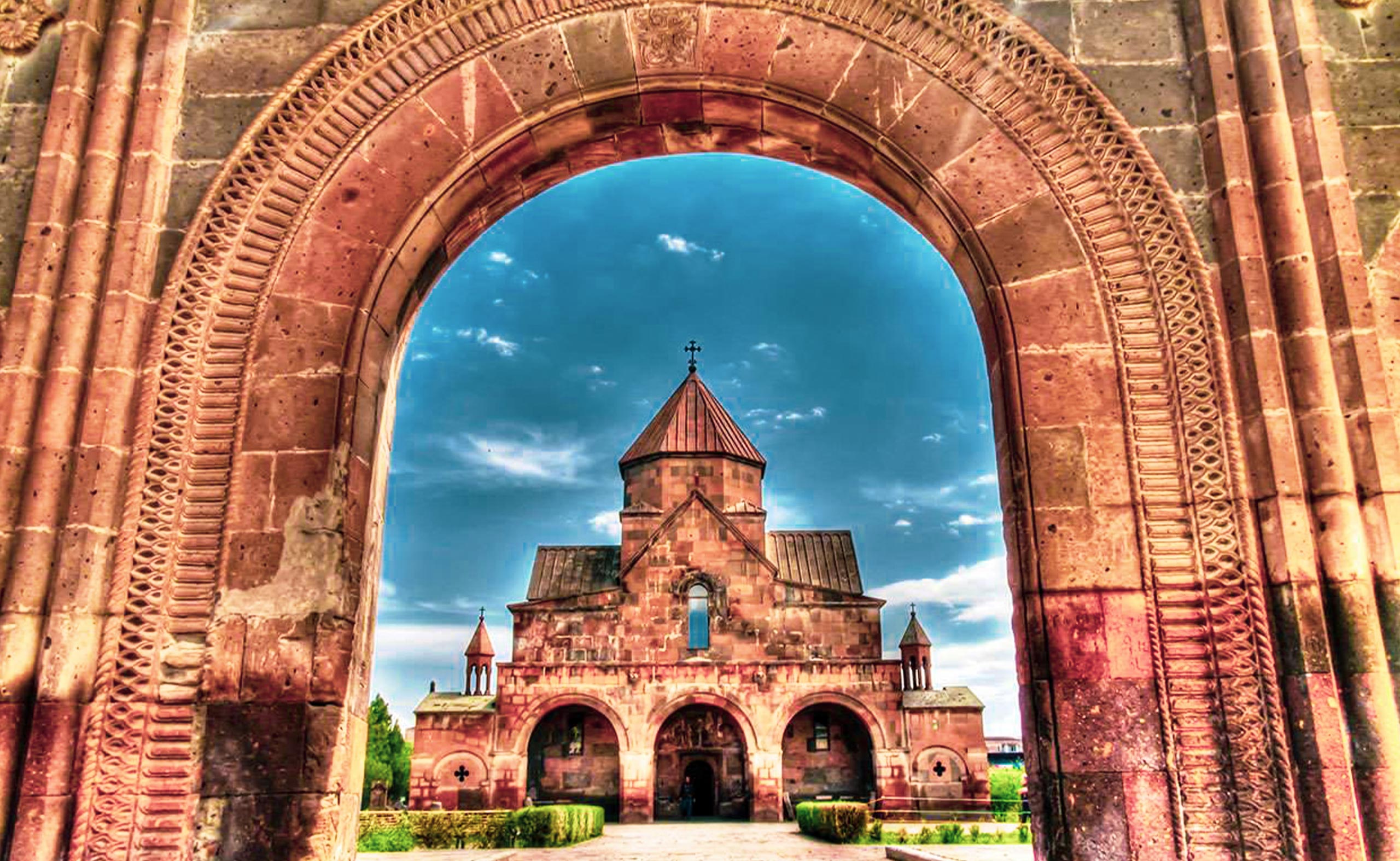 Located a few hundred metres from the Mother See, the church of Saint Gayane was built in 630 AD. Its cross-shaped plan has remained unchanged despite a partial enlargement of the 17th century with restoration work on the dome and ceilings. The relic of Saint Gayane is preserved in the crypt under the church – the only part of the chapel built by Saint Gregory the Enlightener remained intact.

The Cathedral of Zvartnots 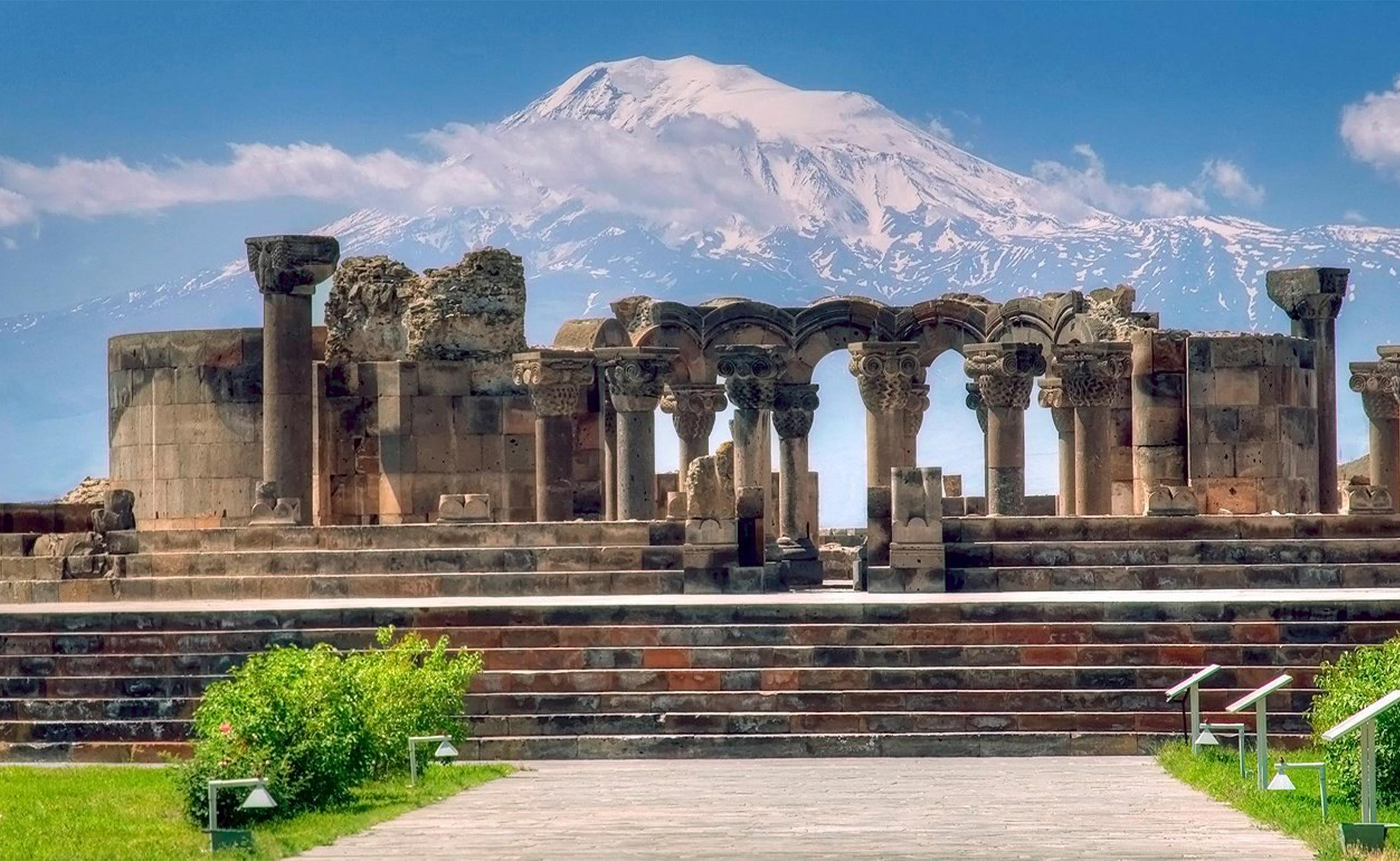 The archaeological site of Zvartnots Cathedral, a UNESCO World Heritage Site, is just a few kilometres east of Echmiadzin. Zvartnots was built between 643 and 652 AD  by the Catholicos Nerses III (nicknamed “The builder”). It was a magnificent cathedral dedicated to St. George, built on the site where there was a famous meeting of the King Tiridate III and Saint Gregory the Illuminator. In 930 AD, the cathedral collapsed after an earthquake and remained buried until its rediscovery at the beginning of the 20th century. The site was excavated between 1900 and 1907 and the foundations of the cathedral, the remains of the Catholicos palace and a wine cellar were brought to light. The interior of the cathedral of Zvartnots, decorated with frescoes, was in the form of  Greek cross, while the outer part was a polygon with 32 sides, which is seen circular in shape from a distance. 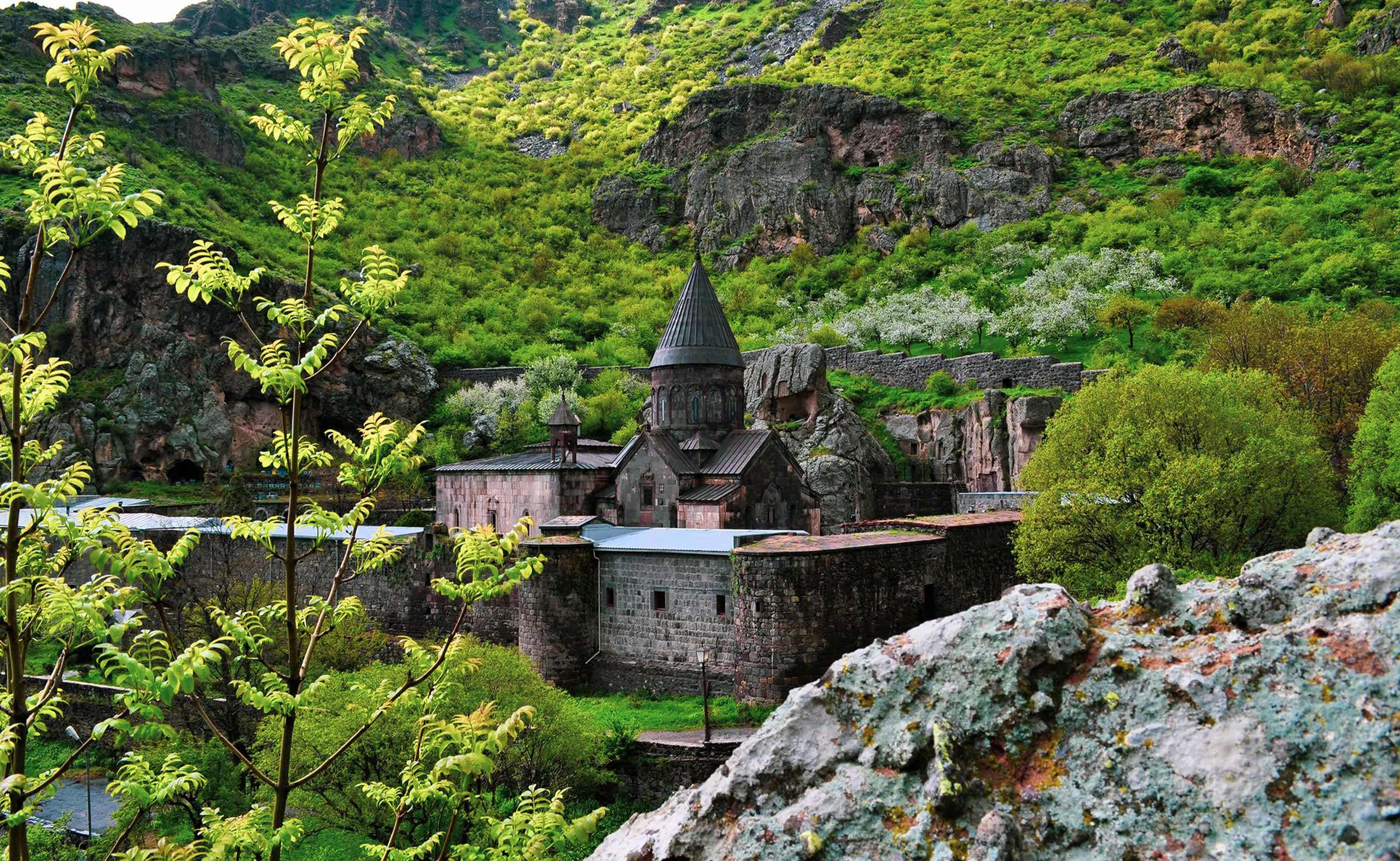 The monastery of Geghard and the breathtaking valley of the High Azat, which is located there, are listed in a UNESCO World Heritage Site since 2000. The original name of the monastery was Ayrivank, or “rock monastery”. Its current name can be dated to the 13th century, when the legendary spear  that pierced the body of Christ was preserved there. The spear, which was brought to Armenia for the first time by the Apostle Thaddeus is currently exhibited in the treasure of Echmiadzin.There is a spring in one of the gorge caverns of Geghard that has been considered as sacred since the pagan era. Still, people tied handkerchiefs on the trees around the spring as a sign of good luck and the pilgrims consider it as a source of healing powers. 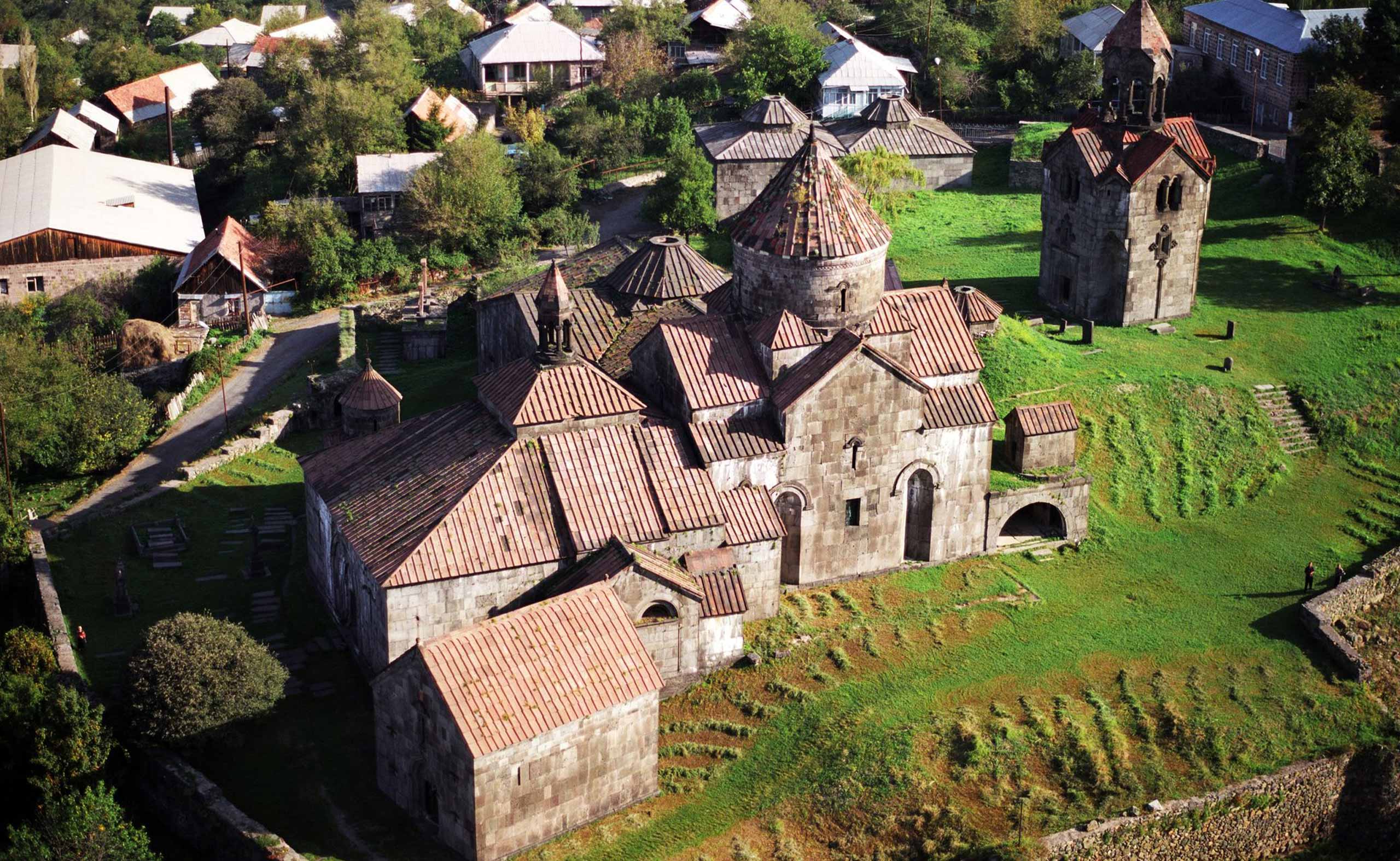 Masterpieces of religious architecture and important intellectual centres in the Middle Ages, the monasteries of Haghbat and Sanahin in the northern province of Lori were the first sites in Armenia to be included in the UNESCO World Heritage List in 1996. They were chosen as sites heritage of humanity because they represent the pinnacle of Armenian religious architecture, whose original style blends elements of Byzantine eclectic architecture and the traditional architecture of the Caucasus region. Both monasteries were founded in the 10th century. Between the 10th and 13th centuries, the monasteries of Haghpat and Sanahin were enlargened to include more than 20 churches and chapels, four annexes, mausoleums, bell towers, academic buildings, libraries, refectories, tunnels, bridges and other monumental structures. In these monasteries, the humanities, sciences and medicine were studied, treaties were written and miniatures were painted. 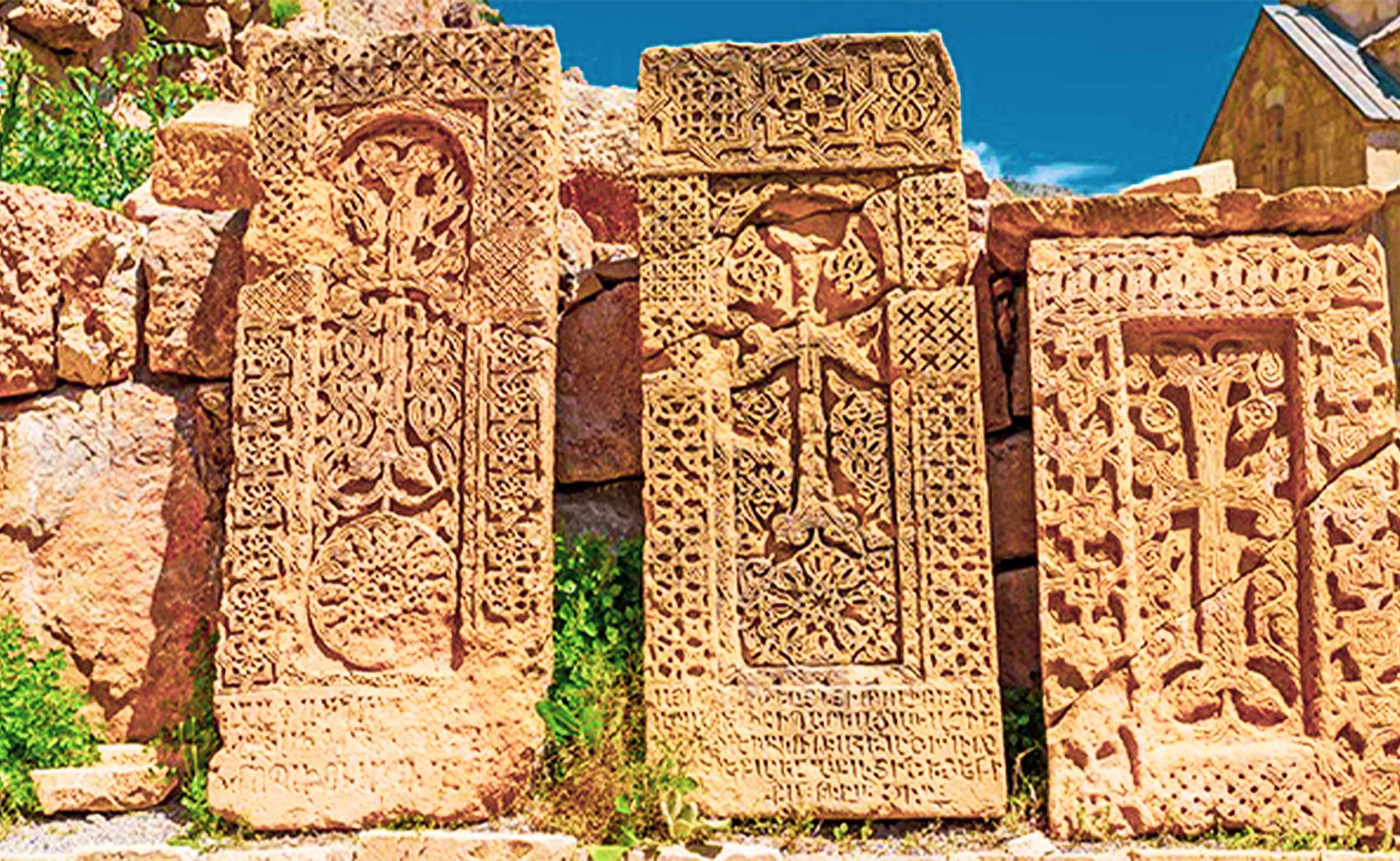 The Armenian art of stone crosses, the symbolism and mastery of stone crosses were registered by UNESCO on the Representative List of Intangible Cultural Heritage of Humanity in 2010. The Armenian khachkar represents a rectangular stone slab, about 1.5-3 m, and is placed, as a rule, on a pedestal. On the eastern face a large cross is carved. The central cross of the kachkar symbolizes the tree of life. Under the cross there is usually a circle, the symbol of the sun and the wheel of eternity. In some cases the circle is replaced with a stepped stone – symbol of the Golgotha mountain. The khachkars have had several functions: for thanksgiving or for prayer, to commemorate military victories, important events, church buildings, bridges, fountains and even city foundations. Most of the stone crosses were built as funeral monuments. They are signs of Christian faith and symbols of a highly developed culture.

THE 150th ANNIVERSARIES OF KOMITAS AND HOVHANNES TUMANYAN 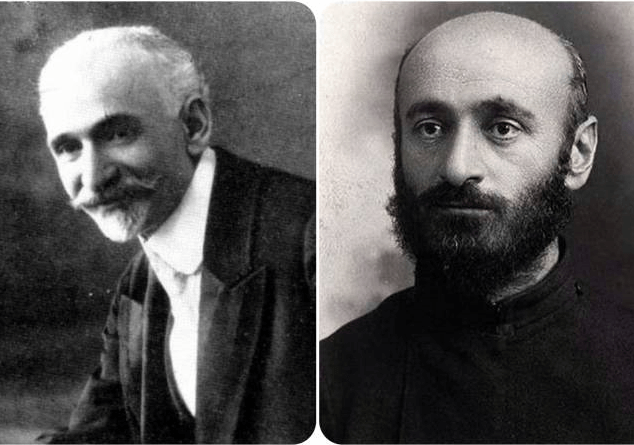 The 150th anniversaries of Komitas and Hovhannes Tumnayan are included in UNESCO Calendar of Anniversaries of Eminent Personalities and important events for the 2018 – 2019 cycle.  The nominations submitted by the Republic of Armenia – the “150th anniversary of the birth of Soghomon Soghomonian, known as Komitas Vardapet, composer, ethnomusicologist, music collector, singer (1869-1935)” (with the support of France and Germany), and the “150th anniversary of the birth of Hovhannes Tumanyan, poet, writer, translator (1869-1923)” (with the support of Georgia and Russia) have been approved by the Organization.