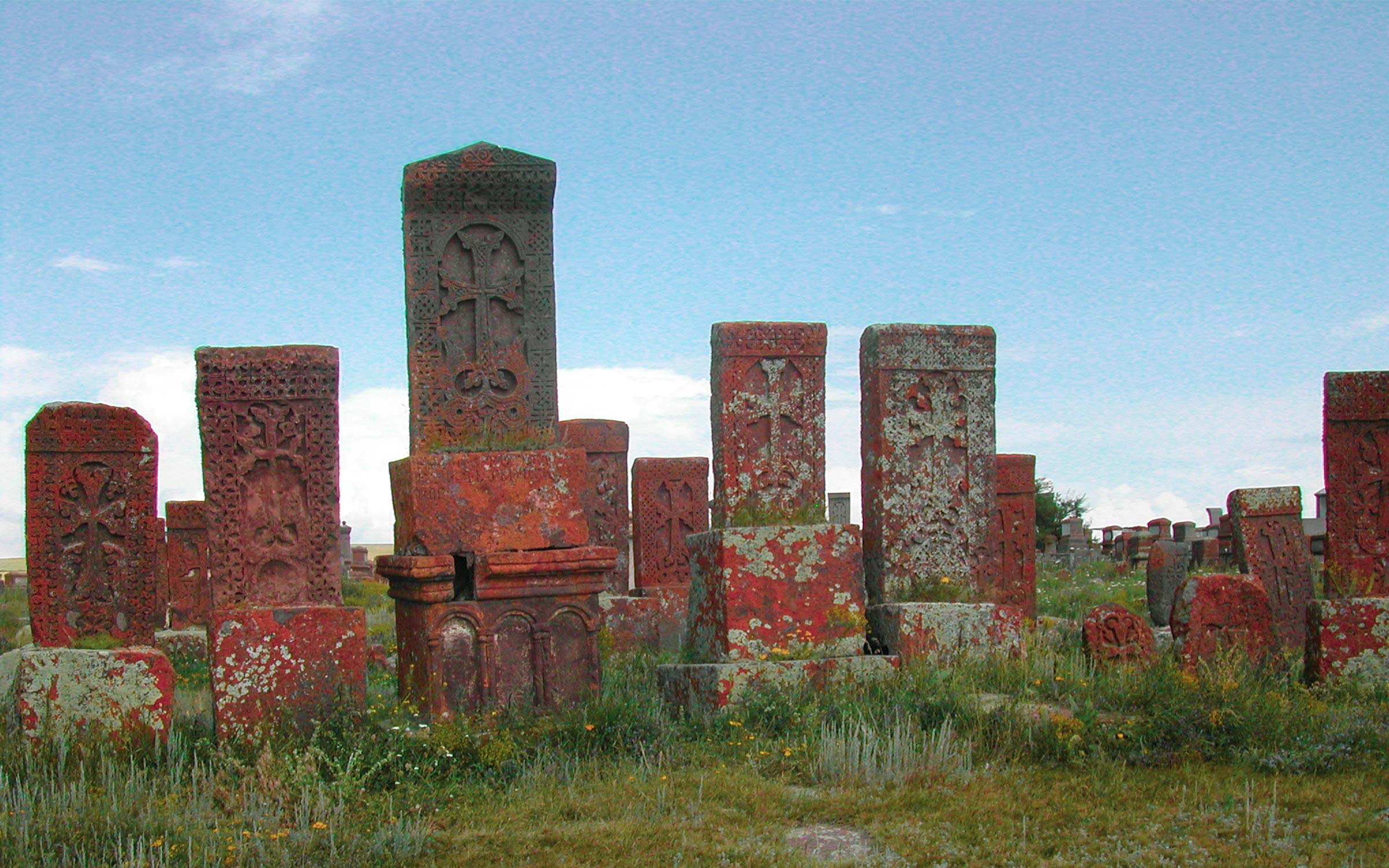 For those who want to learn more about Armenia, its origins and its history, we offer an unforgettable travel itinerary to discover the people who lived at the foot of Ararat, the mountain where according to biblical tradition, Noah’s Ark stopped after flood. We will have the opportunity to visit regions with strong and ancient traditions and to know the Armenian Orthodox cult, in what was the first state to adopt Christianity as an official religion, in 301 AD. We will explore the main monasteries of the country, the megalithic site of Stonehenge, and Yerevan, the modern metropolis that still retains traces of its ancient past.

After breakfast, leaving for Kotayk region with a stop at the granite arch of Eghishe Charents, which overlooks a wide valley dominated by the imposing Ararat scenery. Arrival at the village of Garni to visit the pagan temple: it is the only testimony left from the Hellenistic period in Armenia. Afterwards, visiting the evocative rock monastery of Geghard (13th century), an example of sacred architecture in Armenia. The name means “temple of the spear”: it kept a fragment of spear that the tradition attributed to the spear with which the centurion wounded Christ on the cross. Returning to Yerevan to visit the craft market called Vernissage, where Armenian handicrafts are exhibited. Overnight at the hotel.

After breakfast, departure for Echmiadzin to visit the church of Saint Hripsime (7th century), where the remains of the first Armenian martyr are preserved. Next, visiting the patriarchal cathedral of Echmiadzin built according to tradition by St. Gregory the Enlightener at the beginning of the 4th century, at the place indicated by Christ himself in a vision. At the same architectural complex resides the Catholicos, head of the Armenian Apostolic Church. If we visit takes place on Sunday, we will be present at the Armenian Sunday Liturgy accompanied by Gregorian spiritual songs. Visiting the ruins of Zvartnots cathedral (7th century). Continuing visits to the fortified Amberd complex (7th -13th centuries), which means “uncatchable fortress”. On way back to Yerevan, visiting the Saghmosavank monastery (13th century). Overnight at the hotel.

After breakfast we leave Yerevan for the south of Armenia. The first stop is at the monastery of Khor Virap (7th century), which means “deep pit”: it indicates the place where St. Gregory the Enlightener was held as a prisoner for long. From the top of the monastery walls we can enjoy one of the most beautiful views of  Ararat. Going on to Noravank, a 13th -14th centuries monastery complex. The deep gorge that leads to the monastery is an important naturalistic oasis in which finds of the Bronze Age have been brought to light. Departure for Siunik region, close to the border with Iran: near the city of Sisian there are megaliths (menhir) similar to Stonehenge: all the stones are basalt, some carved with slits. The megalithic place was an ancient observatory that was used to follow the movements of celestial bodies and to measure time. Overnight at the hotel.

After breakfast we will leave Goris. The first stop is scheduled at Tatev monastery, which can be reached by cable car, on a 5.7 km route. Founded in the 9th century, it was the center of an important miniature school and a first class religious and cultural center. The Silk Road was composed of many routes connecting the East and the West, and they are crossed in Armenia. The streets were studded with caravanserai, where the caravans and their animals found accommodation. Visiting the caravanserai of Selim pass. Afterwards the majestic Lake of Sevan will be in front of us. Stop at the large and ancient Noraduz cemetery to admire the khatchkar, or “stone crosses”, finely chiselled on the tufa rock, symbols of excellence of the Armenian Christian art. Panoramic tour (if the weather permits) around  the peninsula on Lake Sevan. Overnight at the hotel.

After breakfast, leaving for the border with Georgia. We will go through the villages of the molokans, a population of Russian origin of ancient Christian belief, established almost two centuries ago in Armenia, until reaching the monasteries of Haghbat and Akhtala. The Haghbat monastery (10th–13th centuries) is a part of the UNESCO World Heritage. It is presented by a main church with a bell tower standing alone, a series of other chapels, a refectory, a library, a covered fountain. Everything is surrounded by walls where cylindrical towers alternate. Going on with visits to the fortified monastery of Akhtala (10th -13th centuries) famous for its beautiful and ancient frescoes. On the way back, visiting the medieval bridge of Alaverdi. Overnight at the hotel.

After breakfast, departure and visit the Redemptoris Mater Hospital, founded by intention of John Paul II and managed by the Italian Camillian fathers. Through the voice and testimony of Father Mario it will be possible to experience the fruits of solidarity and getting to know the real difficulties of the Armenian population living outside the capital. Stop and visit the city of Gyumri, dating back to the 7th century BC. It is known as Kumayri. Hardly damaged by the earthquake of 1988, it still has about 12,000 shacks-houses, inhabited by tens of thousands of people. It is a pleasure to walk through the cobblestone streets of the centre of the ancient Gyumri and also visiting their Bazaar (fruit and vegetable market). Arrival in the evening in Yerevan. Overnight at the hotel.

Morning is dedicated to a visit of the Matenadaran manuscript museum, one of the “shrines” of the Armenian identity and to the Museum of History. We can admire the different types of manuscripts and the splendid miniatures that adorn them. Transfer to the Genocide Museum. The last part of the trip is dedicated to the memory of the terrible events of 1915: visiting the Genocide Museum and having a stop at the shrine. Photography journey makes it possible to retrace the events and causes that led to the first great genocide of the 20th century, and determined the current diasporic structure of the Armenian people. In the afternoon, you will have free time. Farewell dinner in restaurant in Yerevan. Overnight at the hotel.

After breakfast transfer to the airport with the guide or his assistant. Check-in and departure.