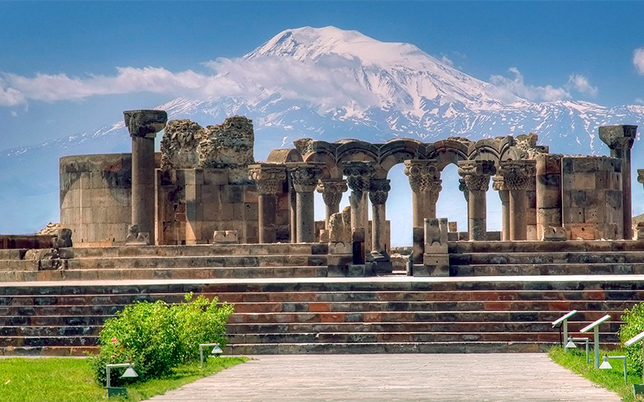 Celebrated every year Armenian Easter, (“Zatik”) is the most important feast of the Armenian apostolic church in a country that was the first state to adopt Christianity as official religion in 301. During your journey you will have the chance to visit the characteristic regions for their ancient traditions, attend the rites, and also experience the atmosphere of the Easter holidays including the Holy Mass dedicated to the Resurrection of Christ celebrated by the Catholicos, the supreme patriarch of the Armenian Apostolic Church) in the Etchmiadzin cathedral that is part of the UNESCO World Heritage…

Departure to Yerevan with an international flight, meeting at the airport and transfer to the hotel.

After breakfast, departure for the discovery of the world of Armenian spirituality by visiting the 13th century monastery of Gheghard, half of which was carved into the rock. This name derived from the relic, long preserved in place and now at the Etchmiadzine museum, of a fragment of the spear with which Christ’s side was wounded on the cross. After the visit of the monastery you will immerse yourself into the pagan world of the impressive site of Garni with its pagan temple of the first century, the only Hellenistic temple in the country. The site is also impressive with its 3rd century Roman baths. Lunch at a farmhouse with assistance to the preparation of lavash, traditional Armenian bread cooked in the “tonir”: Armenian traditional oven and you will taste khorovats: barbique with meat and vegetables, an Armenian traditional dish. After lunch return to Yerevan and visit the Matenadaran, where one of the largest collections of manuscripts in the world is preserved: more than 17000. The Matenadaran hosts a collection of translations of works by Greek, Syrian and other authors, originals of which have not been preserved, so that these translations are of a great value. Here are also preserved rare and precious Armenian miniatures, a selection of which is exposed to the public to be admired. Overnight at the hotel in Yerevan.

In the evening we will participate in the ritual of the Washing of the Feet and in the feast of all the priests in the Catholic church of Yerevan.

On Holy Friday the Passion of Christ and his death on the cross are commemorated. During the ceremony on the eve of the feast, the scene of the burial of Jesus is presented for believers by walking around the church with the symbolic coffin of Christ decorated with flowers and branches.

After breakfast you leave the hotel and proceed to the south of the country, having a stop at the monastery of Khor Virap, Noravank and Qarahunj. The monastery of Khor Virap, is a place particularly dear to the Armenians, the place of the consequent Christianization of Armenia. In addition to its historical importance, this place is an indispensable destination because from the top of its walls you can enjoy one of the most beautiful views of Ararat, the mountain where the biblical tradition tells the Noah’s ark stopped after the Great flood. In the Vayots Dzor region we will visit the 13th-14th century monastic complex of Noravank, a UNESCO heritage site, largely the work of the famous architect and monk Momik, embellished with superb bas-reliefs, a splendid architectural complex built in a suggestive position on the spur of a platform placed below a red rock. Along the spectacular canyon we will have a stop to visit the Cave of the Birds. There the oldest shoe in the world has been discovered. Now it is exposed in the Historical Museum of Armenia.  Lunch will be in a picturesque outdoor restaurant on the bank of the Arpa river or at the place of a typical family in Yeghegnadzor city (depending on the climate). After lunch we will proceed for almost 2 hours for the discovery of the mysterious Stonehunge menhirs near Sissian. The megalithic site is believed to be an ancient observatory that was used to follow the movements of the celestial bodies and to measure time. Stonehunge was often compared with Stonehenge, Carnac and Newgrange. Overnight at the hotel in Goris.

In Goris, in the church of Saint Gregoire participation in the ritual of the burial of Jesus which is presented for believers by walking around the church with the symbolic coffin of Christ decorated with flowers and branches.

Holy Saturday is a day of silence and meeting on the tomb of Christ. According to the established order, after the evening prayer, a new day begins. This evening indicates the end of Lent. This is the day of the readings and the vigil.

In the morning, a small walk in Khndzoresk an old troglodyte village, located in the heart of a landscape of limestone caves. Then we will continue towards the direction of the Tatev monastery which is reached by the Tatev cable car, also known as Wings of Tatev. It is 5.7 km long from which opens a beautiful view of the Halidzor gorge. It turns out to be the longest aerial cable car in the world. It was officially registered in Guinness World Records. Reaching the monastery of Tatev (IX century) is not an easy task: built on a cliff, overlooking a deep gorge, it had to have an extraordinary strategic position. Founded in the 9th century, it was the center of an important miniaturist school and also a first order religious and cultural center. The main church, dedicated to Saints Peter and Paul, was in ancient times frescoed, but today very little of the painted images remains. Lunch in a tavern near the Tatev monastery or in the Areni winery. Visit to the Areni distillery, the home of the traditional Armenian wine “ARENI”. After lunch we will proceed towards Yerevan. Overnight at the hotel in Yerevan.

The Armenian name of “Zatik-Zadig” comes from the word “zatel” which means “separation, moving away and return to God”. In the Old and New Testament, Easter is considered one of the 5 Christian holidays. This day, Christians are dying eggs, especially in red. The egg is the symbol of resurrection and new life, whereas red symbolizes the life-giving blood of Christ which is poured for the salvation of humanity.

The Easter Mass is held in Etchmiadzin (the Vatican of the Armenians) where the supreme patriarch of the Armenian Apostolic church: the catholicos of All the Armenians resides. We will visit the 4th century cathedral of Etchmiadzin, where also the residence of the catholicos of all Armenians is located. We will also visit the 7th century gate of Tiridates, the 7th century church of Saint Hripsime and the ruins of 7th century Zvartnots cathedral. We will assist to Armenian spiritual songs performed especially for the group in the temple of Zvartnots. Easter lunch at a lady’s place where there will also be participation in the preparation of traditional Armenian dishes (master class). The day ends with a walk in Vernissage, the arts and crafts market where you can admire not only the objects of the various artisans, including s crosses in wood and stone, fabric puppets, ceramic plates and glasses, other local handmade objects, but you can also attend the exhibition of silver and gold jewelry, Armenian carpets, embroidery, books, and paintings by Armenian painters. Overnight in Yerevan.

After breakfast departure for the discovery of the wonders of Lake Sevan, the medieval cemetery of Noraduz, the monastery of Ketcharis. The first stop will be at the medieval cemetery of Noraduz full of khatchkars scattered all over the shore of Lake Sevan (they are more than a thousand). The next stop will be on Lake Sevan with the visit of the 9th century Sevan monastery. Lunch in a restaurant on Lake Sevan where we will taste a local fish.  After lunch on the way back to Yerevan we will also visit the 13th century monastery of Ketcharis in the ski resort town of Tsakhadzor, where the guests can go up the mountain Teghenis by cable car. Teghenis is the mountain where in winter people go skiing not only from Armenia, but also from different countries of the former Soviet Union. Overnight at the hotel in Yerevan.

Option: If time permits, there will also be a boat excursion on Lake Sevan (45 minutes – 1 hour).

After breakfast, meeting with the guide and start discovering Yerevan. Visit of the main places and monuments: Republic Square, Opera Square, the Northern Avenue, the “Cascade” Monument, the Yerevan State University, the Victory Park with its statue of “Mother Armenia”,  Tsitsernakabert: Armenian genocide memorial and museum. Lunch in a typical restaurant in Yerevan. After lunch we will visit the History Museum of Armenia on the Republic Square. The museum exhibits a vast overview of the treasures of the Armenian civilization from prehistory to the present day through the Antiquity, the period of Urartu and the medieval period. In the afternoon free time with a visit to the local dried fruit and spices Market which is ideal both for personal purchases and also to admire the market exhibition. Farewell dinner in a restaurant accompanied by Armenian songs and dances. Overnight in Yerevan.

After breakfast, transfer to the airport with the guide or his/her assistant. Check-in and departure.